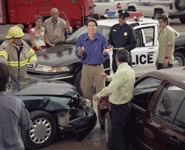 If you’ve ever been involved in a multiple vehicle accident you know it can be scary, stressful, and a mess to sort out. Maybe you were involved in a mini pile up after icy roads caused cars to slide into a median. Perhaps you were stuck in the middle of a traffic jam on the freeway and a driver that wasn’t paying attention rear ended you from behind (causing a chain of reaction). While some multi-car accidents can be minor and those involved may walk away without a scratch, many are serious resulting in fatalities.

Not only can the details of a crash be difficult to determine and often require accident reconstruction, but it’s often extremely hard to prove who is at fault when a multi-vehicle crash occurs.

If only this question could be easily answered.  In some multiple car accidents, the at-fault driver admits right away or upon investigating the details of the accident, the answer is clear. Unfortunately, this is rarely the case. To determine who is at fault requires a lot of questioning from authorities, cooperation from all drivers involved, detailed reports, and even accident reconstruction.

Consider this scenario: Car A, B,& C were in a chain reaction accident. Car A’s driver was approaching a construction zone and stopped for a flagged worker, Car B is a large delivery truck and the driver looked down at his clipboard on the passenger seat. He braked suddenly and rear ended Car A. Car C was following Car B and rear ended B.

Seems like Driver B is at-fault since he was not paying attention, but given further details of the crash, the other drivers may be at fault too. Car A’s brake lights were out so Car B did not have “proper notice of stopping”. Car C was tailgating and due to the lack of distance between B and C, C’s driver did not see they were approaching a construction zone. Even after receiving more information, it can still be confusing. Depending on your state’s laws, the driver at fault may be different.

Before and After a Multiple Car Crash

It’s impossible to determine whether or not you will be involved in a multiple car accident, but there are ways to avoid being in an accident or at least being “at fault” if you are in one:

Even if you are as careful as you can be, you might still find yourself in an accident. If you are in a multi-vehicle accident, it’s important to:

Car accidents are always a hassle and rarely “cut and dry”, but if you follow the correct procedures after an accident, you can get back on the road in no time.