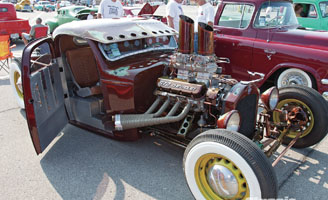 Just wanted to share some thoughts on our business.

Today at the Good Guys show I appraised two vehicles, one was a beautiful El Camino that belonged to the owner since the car was one year old and the other a ’68 Chevy truck built by a very talented young man. Both were brought to show by Robby Collvins, the builder of the Rat Rod truck. Robby wanted me to appraise them because he said it was a good benefit for his friends and customers, he knew I would give them an outstanding product. I meet Robby at Good Guys about 2 years when I was just starting the business and we have become good business friends. He has introduced me to many car owners in the East Texas area I would have never known. I think that is very cool.

As I was taking pictures and setting down with the owner and his wife they told me of all the history on the car and what it meant to them and their son and his son. I offered to take pictures of the owner with car and when their son came back I took pictures of them all. Then I got Robby to take picture with his Rat Rod and also took one with builder of ’86 truck. The next thing I knew there were several people watching this and they wanted to have look at their cars and do the same with family.

I also had a President of the Lubbock Car Club invite me out to appraise about 15 to 30 cars on a weekend and have me give a talk on appraisals to all the car clubs in Lubbock.

Today I really became aware of a different view of our business and the true heart beat of the love of cars. It is the passion and a part of families lives that passed on from one to the other. Our appraisal reports save those memories for the family like the ones I meet today.

What a special business we have.