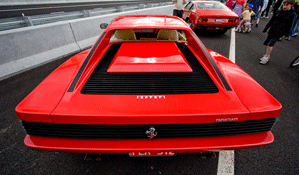 News reports of nearly 230,000 vehicles on the east coast as victims of Hurricane Sandy. Parts of those losses include Classic and Collectible cars which are salvageable for parts but not much more than that.

The flood waters were brackish, a mix of fresh and salt water, this brackish water might as well be sulfuric acid to a car. It ruins electrical systems, corrodes aluminum and steel and even the fiberglass body hot rods and Corvettes are not immune to the long term damaging effects of salt water.

Rare exotics like a Ferrari Testarossa are impossible to find restoration parts for, even more difficult to restore after a flood. It costs more to restored these vehicles than they will ever be worth and they will all have salvage titles making them difficult to insure if not impossible in some states.

Flood damages cars can be cleaned up and made to look new again, but the damage is long lasting and may not show up for a couple of years. The title of these cars will be branded as Salvage title cars, but some states are more lenient than others and their criteria for flood damage may not carry a branded title at all making them candidates for “Title Washing”. Title Washing involves registering the vehicle in several states, one after another. If an owner registers the vehicle enough times, there is a good chance that the title will eventually end up not having a salvage or junk title branding on it. The owner is then able to sell the vehicles as a normal used car, and usually collects a premium on the vehicle.