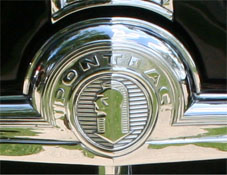 Pontiac was a brand of automobile that was produced from 1926 to 2010. Although Pontiac motor vehicles were first produced in 1907, the company was quickly merged into Oakland Motor Company, and began to produce motor vehicles branded Pontiac as a companion brand in 1926. Pontiac was sold in the United States, Canada, and Mexico by General Motors (GM). Pontiac has been marketed as the performance division of General Motors for many years, specializing in mainstream performance vehicles.

On April 27, 2009, amid ongoing financial problems and restructuring efforts, GM announced that it would phase out the Pontiac brand by the end of 2010 and focus on four core brands in North America: Chevrolet, Cadillac, Buick, and GMC.