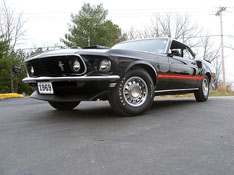 Everyone knows a classic when they see one, right? At least they know of those cars that are universally accepted classics such as Ferrari, Aston Martin, and most of the other exotics autos. So what's going to be the classic car of tomorrow? In the past the Chevrolets, Fords, Buicks, and Plymouths of 30-40 years ago were not meant to become future classics, but some of them have actually earned a spot among the Ferraris and Aston Martins at shows and classic car auctions around the world. Will any of the less collectable cars of the 1980s and 1990s make it?

The trick is to catch these collectable cars before they become a collector and sit on it until it does.

There are always trends and some staples to any car collection. But knowing what will be highly sought after in 20-30 years is a crap shoot. What I know for sure is that it will have the biggest engine offered when it was in production, most likely be a 2-door and if it was a high production car it will be a limited edition of that vehicle.

To me a collector car is a vehicle that stops depreciating, levels off or begins to appreciate over time. If it was never popular when it was in production it