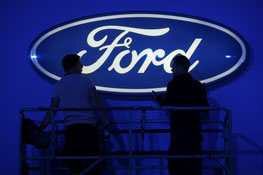 In the world of automotive leaders, market share is everything. This is true in every industry, but is important to the US economic growth since the Detroit Big 3 represent the best in American products.

In 1965 Toyota sold their first car in the US, at the time GM had a 49% of the US market share. Today Toyota is one of the largest automotive manufacturers and GM has a 18% market share. At the same time Ford currently has a 15% and Chrysler 12%.

Ford has held the position of second-ranked automaker for the past 56 years, being relegated to third in North American sales, after being overtaken by Toyota in 2007. Honda passed Chrysler for the fourth spot in 2008 US sales. Since then, because of Toyota's unintended acceleration recall, Toyota has fallen back to fourth place in sales, with Honda trailing in fifth place, allowing the Detroit Big 3 to reclaim their Big Three title.


Because of their business model the majority of the Big 3 operations are unionized resulting in higher labor costs. A large piece of these labor costs are benefits, including benefits for employees, their survivors and retirees. These are costs that the Asian automakers don’t have and even in the US based operations the younger American non-unionized workforce with fewer retirees.

Ford recognized the growing cost of pensions as a long term liability that is unsustainable. First round was to pay out retirees in lump sum payouts, these payouts while seemingly expensive are a mere fraction of the total cost of payouts over time. Second round, off-load the remaining pension liabilities to insurance companies. Round 3 produce cars that sell and competitively priced.

Look for Ford to emerge as the US Automaker in top position. Having not taken a bailout and restructuring, it’s long term debt.