Widely considered to be one of the most aesthetically pleasing Jaguar cars it is also one of the rarest with only 198 of the 2.5 litre and 116 of the 3.5 litre models being made. Most stayed on the home market but 49 were exported. Cars in good condition will fetch well in excess of GBP100,000, a near concours example was sold by auctioneers Bonhams at the Goodwood Festival of Speed in 2007 for GBP199,500. 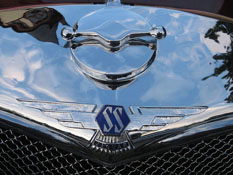