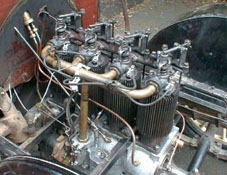 From 1902 to 1934 the Franklin Automobile Company produced roughly 150,000 air cooled engine vehicles in a little over 30 years. These cars were based upon a 4, 6 and 8-cylinder air cooled engines, aluminum bodies and chassis capable of top speeds of 65 MPH. at the height of production in 1929 annual production was 14,000 unit for the year and $2.0 million dollars on profit, but the once giant automotive company took serious losses in the Great Depression and went bankrupt in 1934 after $2 million in loans failed to be repaid.

Franklin Automobile Company is credited with the following automotive firsts