Oh, how times are changin'. Gone are the days of stuffing a Ford Racing crate motor into any and every Blue Oval show car at SEMA. It's all about the boost now... or at least EcoBoost. As part of their "Driving Green" initiative at this year's SEMA Show, Ford will be displaying a 1934 3-Window Coupe fitted with the twin-turbo V6 to create a blend of classic styling with modern performance and efficiency.

Built by Detroit Street Rods, the '34 Coupe is actually the first rear-drive application of the EcoBoost motor. The dual Honeywell turbochargers had to be repositioned to allow the 3.5-liter V6 to fit into the engine bay, but the rest of the motor is in production trim and pumps out 400 horsepower and an equal amount of torque. An all new replica steel body ensures that the coupe is quite a looker.

The engine was repackaged and fitted with an engine plate adapter to mate with an aluminum flywheel, performance clutch and a Tremec TKO five-speed transmission. The turbochargers were repositioned to the front of the cylinder heads and custom aluminum tubing was used to route the air from the custom air cleaner through the air-to-air intercooler. The exhaust gases are routed from the cylinder heads through coated headers, through the stock wastegates, and pass through large custom exhaust cones located outside the engine bay and just above the front fenders.

Going forward, Ford will shift its powertrain strategy to be built around EcoBoost technology. Under the new system:

* A 2.0-liter EcoBoost I-4 would replace naturally aspirated V-6 engines

* A 1.6-liter EcoBoost I-4 would replace naturally aspirated large I-4 engines 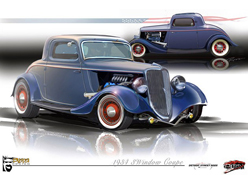