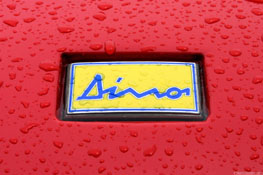 The Fiat Dino is an exotic front-engined, rear-drive sports car manufactured between 1966 and 1973. It was an intermediate step towards creating Ferrari's "Dino" and the two are often confused. The Fiat Dino allowed Ferrari to achieve the necessary production numbers to homologate Alfredo Ferrari's V6 engine for Formula 2 racing. The Fiat Dino Spider was introduced at Turin Motor Show 1966 and Coupe version one year later at the Geneva Motorshow.

Ferrari started its first line of mid-engined cars in 1968 and sold them under the brand name of "Dino" (not Ferrari). The intention originally was to brand all V6 cars as "Dino", as a tribute to Alfredo, Ferrari's son, who had died aged just 24 and is credited with the inspiration for the V6 engine. The 'Dino' brand was rejected however by the US Ferrari dealers as difficult to sell, so the cars were designated 'FIAT' and 'Ferrari' Dinos. The Dino 206 GT and Dino 246 GT & GTS were equipped with engines identical to those used in the Fiats; whereas the later Dino 308 GT4 had an unrelated V8 and was rebranded "Ferrari" in 1976, thus ending the use of the "Dino" trademark.