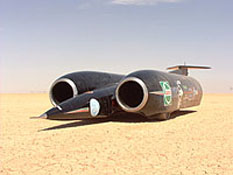 The current Official Land Speed Record is currently held by UK driver Andy Green and was set on October 15 1997 in the Thrust SSC Car at Rock desert in Nevada.

Thrust SSC was the first twin jet engine car to set the land speed record by exceeding the sound barrier with a top seed of 763 mph.