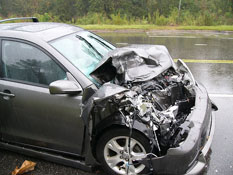 Recently I have had to explain this concept to several clients and also a lengthy explanation and defense in court.

Diminished Value is the loss you suffer when you go to sell your car that has previously been in an accident and repaired. Undeniable everyone agrees that a car with an accident history will not sell for as much as a car without any accident history. You don’t necessarily have to sell your car to quantify how much that loss is, but you will need solid evidence of those damages if you try to collect that loss from the At-faulty party.

The majority of US States do not support you filing a claim for diminished value from your own insurance company if you were at fault. But all US States do have case law supporting Diminished Value claims against the at-faulty party in an accident. Diminished Value is no different than mowing down a mail box or the cost to repair your car. All the physical damaged caused in an accident is the liability of the at-fault party and most states require drivers to carry automobile insurance to cover the physical damage caused in an accident, therefore the diminished value of your car is the liability of the at-fault party and unless specifically excluded, is covered by their automobile coverage.

Establishing who is going to pay for the Diminished Value is only part of the equation. How to quantify the amount of Diminished Value is where Auto Appraisal Network, steps in and proves your damages. Assuming the car was repaired to the standards established by the manufacturer, you still can’t sell your car for as much as you could have had your car not been in that accident. This is where we ask you for the Final Repair Invoice that summarizes all the damages that were not only estimated, but also approved and paid for by the at-fault insurance company. No one can dispute that damages your car received in the accident. Depending on the number and type of repairs made to your car established the severity of the accident. The more severe, the more the diminished value or the less you can sell it for when you try and sell it. The Insurance company has a contractual agreement to return the vehicle to at least the prior to loss condition or better. Every state requires you to disclose prior accident damage and there are services that report this information to savvy consumers, so one way or another your potential buyer is going to find out about this accident and when they do, they are not wanting to pay full price. As a matter of fact, depending on the severity of the damage they will pay proportionally less for a vehicle with more sever repaired damage. And what better way to establish the severity? With the repair Invoice that resulted from the accident.