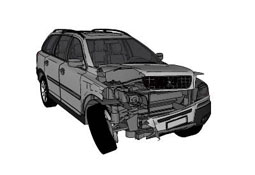 The other day I was called up by a client in Sherman Oaks, California that had been in an accident in their late model Volvo SUV. They were told by their insurance agent that since the car had been in the accident, even though the car had been completely repaired by an authorized repair facility, the car is worth less than had it not been in an accident. As it was explained to the client the car would be reported on the car fax and when they decided to sell it, the value would be diminished and not be able to be sold as a Certified Pre-Owned (CPO) and won’t be sold on the dealers lost. They called me to tell me this story and ask me if I could help them with an appraisal for their Volvo. I said, of course I can, appraisals are our business. So I made an appointment and went to see the vehicle. Upon arriving I looked at the car and asked for the repair order to establish the severity of the damage. When I asked for that, I was asked if I wanted the report from the first accident or the current accident.

At that moment I realized that I had not asked all the questions before I went there. The main questions should have been, had there been any other accidents in the cars history, and who was at fault. There had been prior accidents and that prior accident precluded the owner from now claiming any diminished value, as the Volvo’s value had been reduced by the first accident and its prior to loss value could not assessed at this time even though the first accident was 4 years ago.