Bill Colford has had a lot of Honda 600s. Almost more than he can count. Pretty much every day since 1989, he has had at least one of the little landmark Hondas in his garage or driveway. So many, in fact, that he's become perhaps the country's No. 1 authority on the tiny two-cylinder creatures.

But he's never had, or even seen, one any nicer than his fully restored 1972 Z600 coupe, and he probably never will. That's because not only are there not many of the 600s around anymore, it would be mighty hard to improve on Colford's orange coupe. It has only 300 miles on it since its re-assembly, and has been built to stand as a pristine example of the car that Honda sent stateside to break into the U.S. market.

There may be some undiscovered cars still hiding in garages and backyards, but for now, Colford's best guess is fewer than 1,000 Z600s have survived, with only maybe 300 of the cars actually drivable. 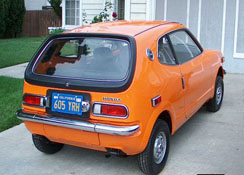