Back in 1970, even though he had just bought a flashy new muscle car, Jim Caron just couldn't help himself. His sparkling new 1969 SC/Rambler was fun and all, but Caron figured that the lonely old 1954 Nash Metropolitan he had seen at a local boneyard needed a new home.

"I dunno, I'm a car guy, I've always been a car guy," said Caron, a resident of Las Vegas. "I had [a Metropolitan] before that, but it was all rusty? Just being the junkyard dog that I am, I had to ask the guy how much he wanted for it. I wound up giving him 40 bucks. Then I put a battery in it and drove it home.

"Now, you have to remember, at that time these cars were absolutely worthless. Hey, $50 could buy you a real car back in those days!"

Caron might not have guessed it at the time, but his decision to part with two Andrew Jacksons has blossomed into a longtime attachment to his little Nash, which is now a shiny, fully restored show-stopper that has become a permanent part of Caron's ever-changing collector car fleet.

Click here to read more about this mighty mite. 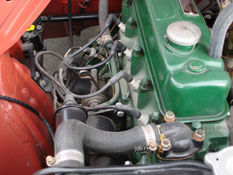