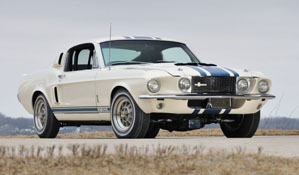 Mecum’s 26th annual Original Spring Classic held May 14-19 Sold this beast for a Whopping $1.3 million beating out the previous record price for a Mustang. The 1967 Shelby “Eleanor” made famous in Gone in 60 Seconds brought a then record of $1 million.

While the Eleanor was a fictitious movie car the Super Snake is a very real car. Using the same GT40 427 CID engine, aluminum heads, aluminum water pump and a forged crank. The Super Snake was built for reliability testing of the Goodyear Thunderbolt tires which by today’s standards are narrow family car tires and the easiest way to identify the Super Snake with its narrow white wall tires.