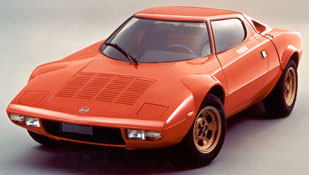 Half Lancia, Half Ferrari

The Lancia Stratos HF (High Fidelity) was designed by Marcello Gandini of Bertone and debuted at the 1971 Turin Motorshow. It resembled the previous Lancia Stratos in name only. Bertone fitted the Stratos with a Ferrari Dino engine for the 1971 prototype. The Stratos was designed and developed as an all purpose built rally car. In 1972 Lancia confirmed it would use the Ferrari engine for the road and rally cars and production started in 1973, with the production of 400 cars.