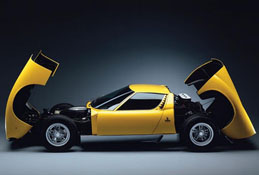 Are vintage Lamborghini’s really worth the $1 million plus?

In light of lack of available Ferrari’s it seems the next collectible Italian super car is the Lamborghini.

So you ask what to buy to make a little money in the future, look at this trend;

I don’t know about you but that’s way better than my stock portfolio. Not bad for a Tractor manufacture who unveiled the first Lamborghini 400 GT in 1966. Keep in mind the first Ferrari came out in 1947 nearly 20-years before.