Given Mazda's success with it, you might think that the rotary-piston engine was a Mazda invention. Not true - rotary-piston engines have been proposed since before the age of internal combustion. But all except one were merely historical footnotes. That one is the Wankel, and its only current automotive proponent is Mazda.

The Wankel engine was developed by German inventor Felix Wankel, beginning with drawings and prototypes in the 1920s. His first patent for a rotary piston engine was granted in 1936. But it was not until the 1950s, when Wankel began collaboration with German car and motorcycle manufacturer NSU, that the Wankel rotary was developed to the point of actually being useable in a motor vehicle. 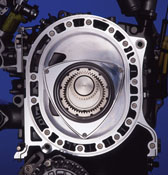 Protect your Investment. Have it Appraised!