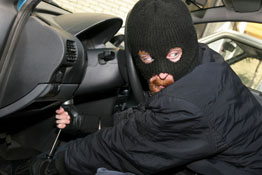 When you imagine car thieves in action, you probably envision them scoping out the latest and greatest sports car. They skillfully infiltrate the multiple layers of security and drive off with a very expensive vehicle, leaving the owner and the authorities in the dust. If you wanted to bring your vision back to reality, however, you would need to replace the sports car with a '94 Honda Accord. The '94 Accord, says Forbes, is the most stolen vehicle for 2011 and 2012.

In fact, all of the top stolen vehicles are fairly mundane, and many of them are older models with security systems consisting only of locking doors and windows that roll up. The top vehicles preferred by car thieves may be surprising, but they can also give some hints on how to protect your own car from theft.

This last year saw a very similar lineup of most stolen vehicles. Again the '94 Honda Accord topped the list. This time the '98 Honda Civic reached the top ten, along with the '91 Toyota Camry. A newer Ford truck entered the ranks — the '06 F-150, as did the '04 Dodge Ram truck. Car thieves also favored the Dodge Caravan and Ford’s '02 Explorer SUV.

Why So Many Older Models?

Criminals prefer easy targets, and older vehicles tend to be easier to steal. They feature less robust security systems, or no security systems at all, and they can be sold to undiscriminating scrap yards or chop shops for quick cash.

This preference for older vehicles may seem predictable, but not all thieves are sticking to the old stuff.

The National Insurance Crime Bureau (NICB) has seen an increase in the number of newer vehicles hit by car thieves. Thieves pull off these thefts by forging documents or recruiting locksmiths or car dealership employees to get the key-codes of newer vehicles.

Normally you must provide documentation to the locksmith or dealer proving your ownership to get a replacement key-code. Thieves are managing to get these codes anyway, and use them quickly to unlock newer cars and make off like bandits.

Good security is essential to stopping thieves. DIY security options are becoming more popular with consumers because they're often easier to use and cheaper, according to Securitycompanies.com. Car owners are also enjoying easier access and improved security with systems like Viper’s SmartStart, which you can control using your smartphone device.

Practicing safe habits, like parking your car in a visible area, always locking your doors and keeping valuables in your trunk are good for discouraging thieves. A quality security system is also an excellent idea to protect your vehicle.

Do What You Can

It may not be possible to protect your vehicle from determined thieves completely. You can keep in mind the things they look for, however, and do what you can to make your car less of a target.