The Electric and Hybrid Vehicle Paradox 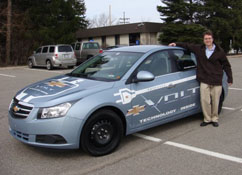 Americans are desperate to break free of the of our oil dependency. Like any addict relinquishing control of our lives to a foreign entity is not without risks. Oil countries see that Americans can’t live without oil and just like the Corner drug dealer once you’re addicted, they can raise the price and control your destiny.

So any vehicle that an individual can drive that doesn't run on gasoline is thought to be breaking free from our addiction to oil. But just like the drug addict we can’t see past what we see in our daily lives. A car that runs on electricity is definitely a step in the right direction, but where does the electricity come from? Electric cars run on electricity generated from the consumption of natural, gas, coal, nuclear energy and maybe less than 20% from renewable energy sources like hydro-electric, solar and wind sources. So roughly 80% of that electricity is non-renewable. So indirectly an electric car still doesn't makes us energy independent. Hybrid cars can generate their own electricity, but at the cost of using petroleum products to make that electricity.

In theory it sounds great, but how many folks are ready to pay the un-subsidized prices for these vehicles? These cars aren't cheap to build and no one can make a profit and competed with gasoline powered cars so the government has to subsidize the costs of these vehicles, roughly $7,500 per car. Isn't the government actually “We the People”? were all paying for this paradox that were becoming energy independent wen actually we’re barely making a dent.

In my opinion, true energy independence will have to rely on renewable energy sources the we currently own. No one can deny that Hydrogen is the most abundant energy source on earth. Hydrogen can is most commonly extracted from water and natural gas. Hydrogen doesn't necessarily need to be burned like gasoline to be useful, configured as fuel cell hydrogen is just a different kind of battery and can run an electric motor. So while the electric and hybrid cars are a paradox, they are only a step in the right direction towards being energy independent.

To request an appraisal, please complete the sections below:
The Electric and Hybrid Vehicle Paradox
Facebook Twitter Google+ LinkedIn Email