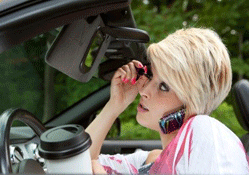 In 2011, 32,479 people died in the United States as a result of a traffic accident. In 2012, that number was 33,561, which represents the first time the number of vehicle-related fatalities increased since 2005. There are many factors that contribute to those numbers, including inclement weather, road obstructions, and inexperience behind the wheel. However, the primary reason that there are so many fatalities comes down to personal choices. Here is a list of the top 5 worst things a driver can do behind the wheel, as well as some statistics to show exactly how the deadly behaviors contribute to the egregious fatality rates.

This one goes without saying, and will always be at the top of the list. Drunk drivers cost 9,865 people their lives in 2011 and another 10,322 lives in 2012. Of those who died in 2011, 226 were children, and of that number, 122, or 54% of them were riding with the intoxicated driver. According to the Center for Disease Control, impaired drivers’ cost the United States more than $51 billion each year. In short, there is no longer any excuse to drive while intoxicated. Always designate a driver.

The rules of the road are in place for a reason. They’re designed to keep order on the road and help prevent traffic accidents. Unfortunately, when people ignore those rules, other drivers are left unable to react accordingly since they won’t have a way of knowing what to expect. Here are a few statistics that show just how deadly it is when drivers disobey traffic laws. The figures are from 2011 and the number listed next to each represents the number of drivers whose actions caused a fatal accident:

Cell phones and driving do not mix, regardless of how they are being used: talking, texting, Facebook, reading the news, playing a game, or listening to music. That doesn’t stop people from mixing the two though. According to a report from the National Highway Traffic Safety Administration (NHTSA) in 2011 at any given time during daylight hours in 2011, as many 660,000 people were in engaged in some form of cell phone activity while driving.

How dangerous is the practice of using your cell phone while driving? As an example, people who text while driving are 23 times more likely to cause a car accident.

Using a cell phone while driving fits within the category of distracted driving. Drivers who engaged in the practice played a part in the more than 387,000 injuries and 3,300 fatalities caused by distracted drivers in 2011.

As counter intuitive as it may sound, manipulating a navigation, or GPS device, is just as dangerous as using a cell phone, and should also be avoided. Why is it one of the worst things you can do while driving? The use of a GPS system, just as with a cell phone, requires the focus of three critical functions: manual, cognitive and visual. When driving, all three of those functions are required. When they are all three used to focus on something other than driving, a person is clearly much more likely to crash, as evidenced by the fact that texting while driving, which also requires manual, cognitive and visual skills, increases the chance of an accident by 23 times.

Speeding is deadly. The NHTSA reports that 9,944, or 31% of all vehicle-related fatalities in 2011 was a result of speeding. Speed-related collisions cost United States society an estimated $40.4 billion a year. That could include things people wouldn’t normally consider, such as lost wages due to injuries, social security disability payments, and medical bills that go unpaid.

When drivers make poor decisions behind the wheel, they have the potential to take lives and change lives for the worst. By following traffic laws, and driving sober and not distracted, drivers can save tens of thousands of lives a year, instead of taking them.

To request an appraisal, please complete the sections below:
The 5 Worst Things People Do While Driving
Facebook Twitter Google+ LinkedIn Email