The Bimotore was commissioned by Scuderia Ferrari to compete with the German Auto Union and Mercedes-Benz. It was powered, as the names suggests, by 2 engines, one in front and one behind the driver. It was a very powerful car with some ingenious new features which were required to attach both engines to the rear wheels ; it had central steering and independent suspension. It was to be used on the faster tracks and fast it was but the tires couldn't handle the immense power and weight of the car. It set a speed record of 327km/h.

Although every inch an Alfa Romeo, the Bimotore was the brainchild of Enzo Ferrari and Luigi Bazzi, one of Ferrari's engineers at Scuderia Ferrari. In the early 1930's, Scuderia Ferrari had been delegated the responsibility for running the Alfa Romeo racing operation. Indeed, it is said that the 1935 Alfa Romeo Bimotore is the very first car to carry the now famous prancing horse insignia of Scuderia Ferrari on its flanks and above the Bimotore's valentine heart-shaped grille work.

Only 2 Bimotore were ever built. 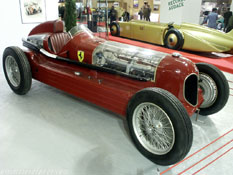