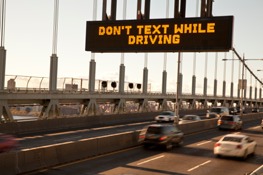 Fortunately, there are a number of awareness campaigns focused on bringing to light the dangers of texting and driving. These include Fort Wayne, Indiana’s Parkview Trauma Center, the Ad Council, and the U.S. Department of Transportation (though they focus on distracted driving as a whole). The Orthopaedic Trauma Association even has a website set up where people can report distracted drivers. Distracted driving is also mentioned on David Resnick's distracted driving page, and it includes not only texting, but things we don't often think about, like talking to someone in the car or eating. But, perhaps no other texting and driving awareness campaign has been more effective than the one sponsored by AT&T.

According to AT&T’s dedicated website ItCanWait.com, about 100,000 car accidents a year involve drivers who are texting. On the same website they show heartbreaking video testimonies from people whose lives have been turned upside down because someone they loved was killed or paralyzed by a texting driver. There are also videos from the other angle: the drivers who were texting and ended up killing others as a result. Here are a few examples:

Hard numbers related to texting and driving are hard to come by because so much of the information that entities like the National Highway Transportation Safety Administration use is based on self-reporting done by those involved in collisions. However, here are a few estimates.

Regardless of the exact accuracy of the numbers listed, one thing is proven time and time again – texting while driving is deadly. AT&T is right – it can wait.

To request an appraisal, please complete the sections below:
Texting and Driving: Not Even Once
Facebook Twitter Google+ LinkedIn Email