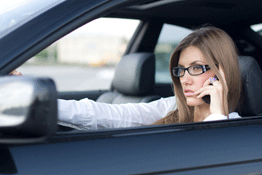 By now, most Americans understand that texting while driving is dangerous; it takes a driver's eyes and attention away from the road which can lead to serious— and even deadly —collisions. While today's hands-free devices are designed to minimize distracted driving, a recent study commissioned by AAA's Foundation for Traffic Safety revealed those devices are not nearly as effective as originally believed. The study provides compelling evidence that despite having their hands on the wheel and eyes on the road, drivers are still suffering from distractions when they use hands-free devices, resulting in a mental overload that causes reaction times to increase.

The research team at the University of Utah, led by cognitive distraction expert Dr. David Strayer, measured brain activity, driver reaction times as well as head and eye movement in order to determine what happens mentally when drivers attempt other tasks behind the wheel. Very common distractions were introduced, including listening to the radio, listening to audio books, talking on a hand-held cellular phone, talking on a hands-free cellular phone and both listening and responding to voice-activated emails (a feature that's becoming an increasingly more common in-vehicle technology upgrade on newer model cars and trucks). The results were surprising:


The AAA study is the most comprehensive study of its kind to date. The results seem to "shoot down" the thought process that seems to prevail today, the false idea (or hope, if you will) that hands-free is synonymous with risk-free. The fact is, our society is much more mobile than ever before, with an increasing number of individuals attempting to utilize their commute times to take care of tasks unrelated to driving. Beyond the in-vehicle technology advances, mobile coverage has also improved with faster connections and stronger signals (see, for example, the 4G coverage map for T-Mobile).

What You Can Do

Advocates feel strongly that simply passing a law against using the technology is not enough to keep the public safe. Instead, they are pushing for increased education for drivers to help them understand how to use in-vehicle features responsibly. They are also pushing policy makers to enforce technology which disables these features while the vehicle is in motion.

As for those business owners and employees attempting to get a jump start on their day by using in-vehicle technology, time management specialists recommend that everyone set aside a specific time (not behind the wheel, of course) to send and respond to email. They also suggest setting aside time, in advance, to plan out your daily activities.

By following these time-management solutions, commuters can go back to being "in the moment," enjoying their drive more and keeping themselves and fellow commuters safer in the process.

To request an appraisal, please complete the sections below:
Strategies to Use Your Cellphone More Safely On the Go
Facebook Twitter Google+ LinkedIn Email