Weight saving was on the top of the list of the designers and all experience Porsche had gathered on exotic materials was used on the '917' as the new car was to be known. Although the tubular frame was almost identical to that of the 908, it was now constructed of aluminum instead of the steel used on the 8-cylinder racer. The chassis lost some of its rigidity compared to the steel one, but its extremely low weight of just 46 kg more than made up for that. Like all racers of the day, the 917 was suspended all-round by fully independent suspension, made up of wishbones. More exotic materials were found here, with the coil springs used being made up of titanium.

The heart of the 917 was its new engine. The engine used identical cylinders to those found on the 908, just four more, giving a twelve cylinder engine displacing just under 4.5 litres. Two things set the new '912' engine apart from the older engines: the design of the crankshaft and of the camshafts. Whereas the 908 used a boxer type crankshaft, the 912 engine was fitted with a crankshaft similar to those found in 'V'-engines, resulting in a relatively shorter engine. The double overhead camshafts were driven from centrally mounted gears, which effectively cut the engine in two six cylinder sections. A long tradition of shaft driven camshafts was abandoned.

Although the flat-12 was relatively short, it was still a huge engine. In order to stick with the 908's wheelbase, the cockpit was moved forward, giving a somewhat akward driving position. A slightly wider body was fitted compared to the 908, to clear the larger engine and wider track. The rear body featured a detachable tail section, which enabled the customer to choose between a high-downforce or a low-drag tail to suit the needs of the track. The rear wing was fitted with movable flaps, similar to the system used on the longtail 908 coupes. Cold air was blown to the engine by a big fan fitted on top of the flat-12.

For 1971 a slightly larger bore brought the engine up to 4.998 litre and 630 bhp. For Can-Am racing Porsche developed the most powerful road-racing engine ever, based on the 12 cylinder unit. With two Turbos and a displacement of 5.4 litres this behemoth of an engine produced 1100 bhp in racing trim, with a lot more available for qualifying.

At the end of season, the Group 4 class was abandoned by the sport's governing body, leaving the Porsche 917 obsolete. Instead of building a new car to comply with the 3-litre prototype regalutions set for the 1972 World Championship, Porsche set out to modify the Porsche 917 for the popular North American Can-Am championship. The results were again very good, making the 917 in its different guises one of the most successful racing cars ever. By scoring the first of now many Porsche victories at Le Mans, the 917 story will always have a gold lining in the German manufacturer's history books. 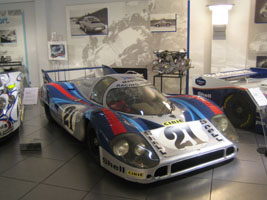 To request an appraisal, please complete the sections below:
Porsche 917, The birth of a legend
Facebook Twitter Google+ LinkedIn Email