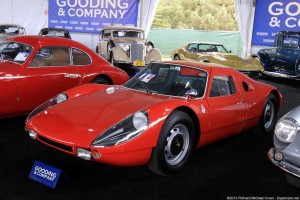 Carrera commemorates Porsche’s success in the Carrera Pan American Race.  Porsche developed its first 4-cam racing "Carrera" engine for the 356 in 1955 known as the Porsche 356 Carrera.  The name was synonymous or high performance race cars, but modern day has become a luxury flagship for Porsche and in my opinion is what built the brand into one of the most famous automotive names.

The first Porsche to be called a Carrera was the 904.  Unable to market the car as the internally name 904 because of similar  Peugeot models, the vehicle was called Carrera GTS and featured lightweight chassis made of fiberglass and welded steel tubing.  Most 904’s were painted silver reminiscent of the unpainted aluminum bodies of past German race cars.

No other Porsche has yet to be called “Carrera”, but the Carrera name lives on as a level of performance for the Porsche product line.

Chassis number 904-001 is at the Porsche factory museum

To request an appraisal, please complete the sections below:
Porsche 904, the One and Only Carrera
Facebook Twitter Google+ LinkedIn Email