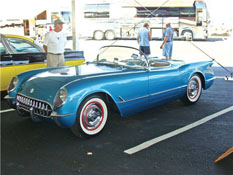 Without a doubt a Corvette is a collectible vehicle and as far as Corvettes go the early C-1’s and C-2 are going through the roof in prices, but why and which ones are the most desirable?

Numbers matching – if a Corvette still has its original drive-train it is said to be numbers matching, GM went to great lengths to document the Corvette as it was being built, as a result major components of the drive-train are uniquely identified and “Match” either the build records or other unique identifiers on the car. These ID’s are easily accessible and when deciphered tell us if a car is numbers matching or if those components have been replaced since the car was built.

Consider that a collectible car is usually in limited production and has some rare options. If a car isn't numbers matching it’s not part of the limited number produced and therefore not limited. The same is true for originality a car is only original once and there is a limited number of original cars and every time one of those cars is restored that number gets smaller. For restored cars that number s growing, cars get restored and the number of competing cars keeps climbing.

When it comes to very rare cars with matching numbers and in original condition the ones in the best condition will bring huge money.

Provenance – knowing the ownership history of a car can also greatly influence the value of a car. If a car has a documented history of ownership it’s easier to prove the authenticity of the aforementioned Numbers matching and Originality. As long as previous owners can confirm what they know to be true the better information the new owner has and will be willing to spend more on a car with a known history. Supporting documentation is critical for rare cars with low miles or rare options.

Protect your investment, get it appraised!