In spite of their traditional design, Morgans have always had sporting or 'sports car' performance, due to their extremely low weight. The light weight design is due mostly to the metal over wooden frame construction.

Morgan produced 640 cars in 2007. All the cars are assembled by hand. The waiting list for a car is approximately one to two years, although it has been as high as ten years in the past.

Among their enthusiasts, Morgans are affectionately known as "Moggies".

H.F.S. Morgan's 1909 Runabout used an independent front suspension system with each front wheel mounted on a kingpin mounted to slide along a fixed pillar and located by a spring. Morgan used developments of this suspension system throughout its existence and it is still used on Morgan's "classic" line, although not on the Aero 8 or its derivatives.

For many years (1974 to 1992), all Morgans imported into the United States were converted to run on propane as fuel to pass the U.S. emissions regulations. However, this conversion, along with bringing the cars into compliance with US vehicle safety leglislation, was carried out by the dealership, and not by the factory, making the cars grey market vehicles.

Protect your Investment. Have it appraised! 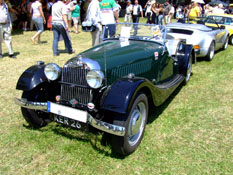