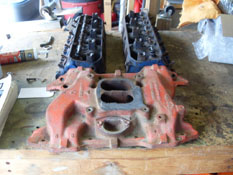 A lot of our clients call us and ask for an appraisal because they saw a car like theirs sell at a televised auction for huge money and they think it’s just about time to capitalize on all the excitement over collectible cars. They say, I’m expecting it to be worth $90,000 to $110,000 because I just saw one just like it sell for that much.

We go out and document the car, come back to the office and start the research, we break down the VIN number and check the paint and trim codes, then take a look at comparable vehicles and value guides to determine the price they have asked for. We send then the report and they are either excited or disappointed. What is comes down to is the numbers.

Did the numbers match? Are those matching number the collectable ones or not?

Basically, the rarer a vehicle the more collectable it can be. There were a fixed number of cars made that were collectable and that number is shrinking due to various reasons.

Speaking of numbers, the term number matching is a loosely used term that doesn’t really apply to all cars. Certain cars don’t have number to match up, but what is meant is that they are original and exactly as it was produced in the factory.

GM cars have numbers that match, Some English and German cars have numbers that match the factory documentation, but Fords and Mopars are frequently said to be “Number Matching” but in reality the best they can be is date correct, as these manufactures never documented the vehicle builds in a way that 2 numbers could be matched up, held side by side and they match, they did use casting numbers that can verify the date range is was produced and if they are close enough to the cars build date they are said to be “date correct”. The next time you hear about a Numbers Matching Hemi, ask a simple question, what numbers matched?

Protect Your Investment. Have it Appraised!!

To request an appraisal, please complete the sections below:
It’s All in the Numbers
Facebook Twitter Google+ LinkedIn Email