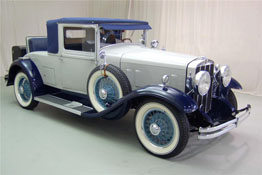 Franklin cars were engineering marvels of the day and the Franklin Automobile Company was one of the first automobile manufactures competing with Cadillac and Packard.

From roughly 1902 to 1934 Franklin Automobile Company produced 150,000 luxury automobiles in Syracuse, New York. Yeah, 150,000. That’s a lot of cars! So where did they all go? You hardly ever see one sold, they are not commonly known brand, but apparently at the time they were one the large manufactures of the time.

Franklins were based on light weight chassis made of aluminum and ran air cooled engines ranging from 4 to 8 cylinders. The engineering of these vehicles was state of the art for the period and Franklin is credited for a lot of automotive engineering first, some of which are still utilized in modern cars.

The first Valve-in-head design. Cars of the period used valve located in the block with cylinder heads with no moving parts. Air flow on these L-head engines was terrible and the close proximity of all the moving parts created overheating problems. The valve-in-head design is a staple in all modern cars.

The First manufacture to employ an automatic spark advance. Cars of the period used a manual spark advance controlled by the driver.

The resulting lightweight cars with luxury appointments made these cars popular and car sales grew at an alarming rate. Nearing the 30’s the economy cooled and the stock market crash, sales followed suit and the Franklin Automobile Company ceased operations in 1933 after disastrous operating losses.

So where did the roughly 150,000 Franklin cars go? World War 2 started in 1939 and the war machine needed raw materials to build airplanes. Airplanes are made of lightweight materials and production requirements for war materials placed a high demand on these lightweight materials and there was a shortage of lite alloys. Americans had to ration and also recycle. Government programs like “Aluminum for Defense” encouraged everyone to collect and recycle aluminum, it’s believed that 10’s of thousands of Franklins were recycled and turned into airplanes to help defend the US in World War II.

Keep in mind that most of the cars of the period were made of steel, some had wooden frames and while steel was rationed it wasn't in as short supply as Aluminum.

A Franklin car today is very rare but they don’t bring the high dollars you think they would. So how much is Franklin worth? Some have sold in the $60k range and a select few for $100k.