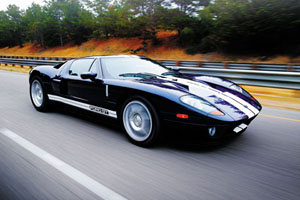 The 1966 Ford GT-40 became known as the "Ferrari Killer" after stunning upsets in the '66 24 Hrs of LeMans - it took the first three positions in a race that the Europeans proudly felt that Americans could never compete in. The modern-day supercar Ford GT was built in limited numbers for the 2005 and 2006 model year only - there will be no production from 2007 or in 2008 and while some claim there is a 2004 model, it was really the concept car. While the Ford GT40 was busy in the late 60's defeating contemporary race cars, the Ford GT today quickly and efficiently dominates it's competition in the Porsche and Ferrari of today!

The Ford GT is an American legend and certainly one of the most agressive and smoothest looking muscle cars ever. Most people define it as a sports car, but I like to define it as an American Muscle Car. The Ford GT really brings out the true colors of America and what the country is about - hard work and muscle!