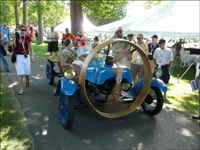 In the late 1930's this one-of-a-kind Helicron was placed in a barn and forgotten. More than six decades later this odd lost little gem was rediscovered, rebuilt, and reintroduced to the world. Although the manufacturer is unknown, it's believed that this car was built in France 1932. Following the first World War it was not uncommon for recently displaced airplane engineers to look towards the automobile industry for employment.

As in this example, a few entrepreneurs developed propeller-powered cars with the notion that propeller power was an efficient means of moving a vehicle. On this car, when the wooden propeller is spinning at full speed and efficiently,this little 1,000-pound boat-tailed skiff can hit freeway speeds exceeding 75 mph. This is the one and only Helicron in existence, owned by Lane Motor Museum in Nashville ,TN.

To request an appraisal, please complete the sections below:
Ever seen a 1932 Helicorn?
Facebook Twitter Google+ LinkedIn Email