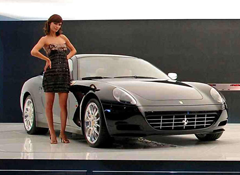 I received a call from a gentleman that had been on a Ferrari Owners Rally for charity.  The rally left Marin County, crossed the Golden Gate, lunched at Post Ranch Inn near Big Sur and ended in Beverly Hills. Not wanting to drive his Ferrari 612 Scaglietti back, he called a tow service.

Seems the tow service did not strap it down  properly and the car fell off the truck, hit a fence and a parked BMW.