Even though the last Pantera has been built about 10 years ago, today it is still the symbol of De Tomaso. 7260 vehicles have been built between 1970 and 1991, and the car was conceived as Ford contender to GM Corvette for the American market.

As a matter of fact, Ford had always provided De Tomaso with engines, in addition Iacocca was close to Alejandro and other De Tomaso vehicles (Vallelunga and Mangusta) had mid-mounted longitudinal engines. These are the basis of Pantera history, however it is quite difficult to understand the reason why this car has become one of the symbols of motor racing. Without any doubt, Alejandro was the founder of this building, while the bricks were supplied by a lot of Pantera fans.

The mid-mounted engine, much higher than the average position, together with a very improved (by comparison with Mangusta) weight distribution, a pure and aggessive design, tyres and rims never seen before made De Tomaso Pantera a dream car. The first press reviews were not enthusiastic, whereas the market research was very much so. Thanks to some agreements, it was decided that Vignale in Turin (where 17 vehicles per day were built) would have been the right place for the body production, the car painting and the interior fitting up. All technical components were mounted at Fossalta plant near Modena.

By the end of 1973, 6128 Panteras were sold. In order to optimize production, De Tomaso plant moved to Bruciata, where it still stands. Unfortunately, on 8th September the business relationship between Ford and De Tomaso broke off owing to severals reasons that did not allow a new agreement. 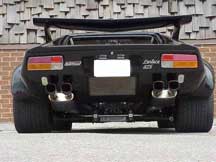 To request an appraisal, please complete the sections below:
De Tomaso - Still a classic to me
Facebook Twitter Google+ LinkedIn Email