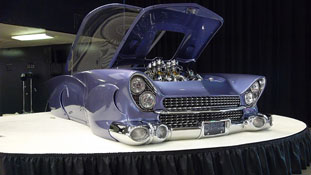 Just when you thought you had seen the wildest Kustom ever along comes something from the East Coast builder, Gary “Chopit” Fioto. Talk about being ahead of his time. His Kustom creation “Beatnik” ’55 ford Kustom is blowing away everyone who sees it and you should expect to see this one-off Kustom on the show circuit.