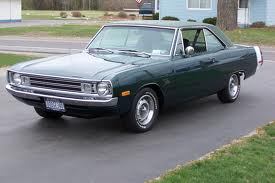 Interesting story about an owner of a 1971 Dodge Dart Swinger began to play out when I passed the car out on the street in front of a house in my parents neighborhood. The house was having the roof replaced and the Dart was a nice yellow car and I was interested about the car so I stopped and went to the front door. The owner came to the door and I introduced myself. I asked him was he thinking of selling it? He said not really but a few other people had stopped and wanted to buy it. He had moved the car out of the way of the construction so it would not be damaged.

He then began to tell me of the car’s history. He bought the car about ten years ago and enjoyed driving it and fixing it. His son later used the car for college and returned it when he was out of college. Now it mainly stays in the garage.

I asked if he ever had it appraised for fair market value to see what it would bring at today’s value. He said no but he said that he would call if he decided to sell it. That next day he called and said that several more people had now offered money for the car. They had approached him with $3,900 to $4,200 and he was happy to sell it for that, but he wanted my appraisal just to make sure on the value.

I showed up the next day to inspect, drive, find history, and take about eighty pictures from underneath to the top of car. The Dart Swinger was rust free with no body damage. The drive train was worn out, but it was a very good starting point for a project car for someone. In a few days the appraisal report was finished and the fair market value was $7,900. Needless to say the owner was surprised and happy. So with my appraisal in his hands he put the car on our web site and found an out of state buyer who had been looking for this type of car for a long time. He sold the car with no argument on price.

The owner was so very pleased he has told several other friends about his experience and thanked me for stopping by that afternoon.