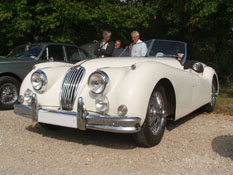 We were contacted by a gentleman in New York to provide a pre-purchase appraisal on an early Jaguar XK140 that was located in Highland Park, Texas. Ron Gibson, Dallas Area Owner and Appraiser, met the owner of the car at his home where the car had been kept. The owner informed Ron that he had terminal Parkinson's disease and selling the vehicle. His nurses had him outside on his property eating lunch in the great weather. The garage was very close to where the owner was dining so, with help, he got up and joined Ron to view the car.

Ron could tell the older man was very attached to the 1950s Jaguar. It was a beautiful white convertible that you could tell had been well taken care of over the years. With the aid of his walker, the owner walked Ron around the car telling him the long history he had enjoyed with the Jaguar. At times the gentleman was emotional.

Ron sat in the immaculate car and started it up. It purred like a kitten and all the gauges worked. It was a great old car.

Ron looked up at the owner and asked if he would want to take a drive with him in the car. The family and his nurses said OK! The owner looked like a young man with a grin from ear to ear as they helped him into the passenger side of the car. They had the top down. It was a beautiful day and off they went.

Ron told the gentleman to point where he wanted to go and that is where they would drive. The car drove great and people were giving them the thumbs up at every stop light. The Jaguar's owner and Ron had a blast!

They drove back to his home to find several of his family members had been informed of the impromptu outing. They were there with cameras and cheers as the two pulled back into the driveway.

The car was quickly sold and Ron will never forget that ride. We are so blessed to do what we do.

Based out of Waxahachie, our family owned Dallas Area Auto Appraisal Network will come to you to get your car appraised. Knowing the value of the car you are buying or the one you are ready to sell is an important step in the life of your vehicle. Let us help you. Call today.